The strength of any offense isn’t just the X’s and O’s. It’s how you drill it.The same goes for player development. They only get as good as the drills they do.

That’s why I believe that the Dribble Drive Offense drills are great for general player development. They are fast paced and require quick decision making. That even goes for the shooting drills.

This is also reflected in the fact that of the 196 pages in the Dribble Drive Offense book, 90 are drills. The drills drill the skills.

This page is about the Dribble Drive Offense, but most of the drills are general development drills for anyone who wants to develop better players. Below are a few examples or you can download the sample PDF here: 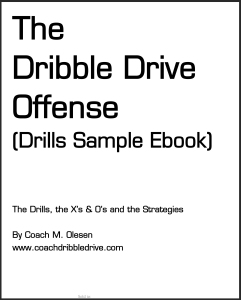 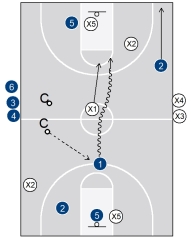 The “Blood” drills are the essence of teaching the attacking mentality of the Dribble Drive offense. This is a simple breakdown of the principles of the offense. It’s fast paced drills to also help in conditioning.

The drills can be anything from

Blood Drills are named to emphasize toughness and going hard to the basket and decision-making. Blood Drills are break-down drills for the dribble drive motion, emphasizing the guard’s ability to break down his man and the reads of all players. 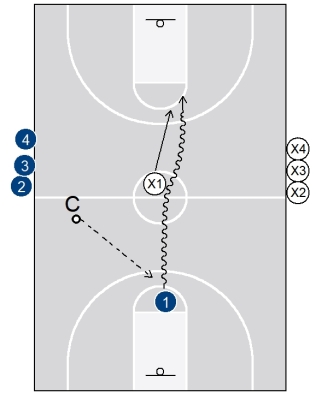 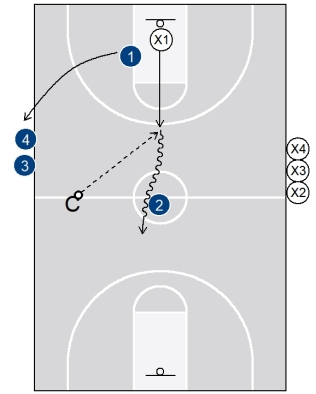 Blood 11 is a player development drill more than a Dribble Drive tactics drill. It basically teaches players to attack at speed. This is a lot harder than it sounds, as most players have been taught to use moves instead of just running by the offense. We call foul if players slow down to make a move.

The Blood 22, Blood 32/33 and Blood 44 drills trains team work and individual skills in the offense. 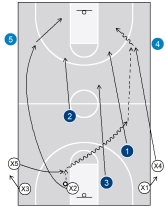 Transition is a continuous 3 on 3 drill that’s fun and challenging, with two teams competing against each other, while focusing on the Dribble Drive Break/Sideline Break and defensive transition.

The drill continues the work started in the Scramble 11 man break drill, using the same tactics, but now requiring the wings to beat their man to force the outnumbered situation.

I can’t think of anything basketball tactics- or skills-wise you can’t do in this drill and it’s one of the fastest drills I’ve ever run.

It should completely replace 11-man break and any other outnumbered drills like 3-on-2, 2-on 1.

We usually run games to 7, ones and two’s, or 11, two’s and three’s. When we need a fun practice we run this drill in 7-game series.

Players may forget to run the fast break properly in this drill. Remind them when needed. Use Dribble Drive options if you’re running the dribble drive.

Defensively the drill enforces the quick return run and players have to communicate to pick up the attacking players. Also the offense has to think about defensive balance as the shot goes up. If they don’t have a safety they are pretty much giving up a layup at the other end.

Also this creates unpredictable outnumber fastbreak situations, which is great for both offensive and defensive development. Defensively this promotes delaying the offense for long enough that the remaining defenders can get back – and obviously hustling back on defense. Offensively it rewards making aggressive decisions before the defense can get all players back.

In this drill you will see your toughest players shine! The defensive player who gets the rebound stays in the drill. 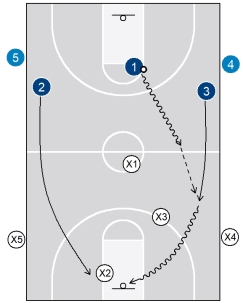 The O-team starts with three players on offense and the X-team with three on defense. Both teams have players standing by at the foul lines extended at their defensive end.

When O-team lose the ball the three offensive players become defenders at the other end.

Any defender can get the rebound to stay in the drill. X2 rebounds the ball and outlets to X5 coming from the nearest sideline. 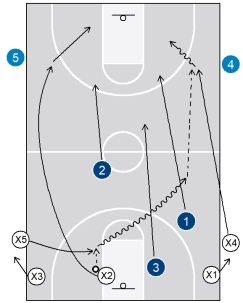 X5 will C-cut to the ball and take 1 to 2 dribbles to get to the other sideline where he will look to pass the ball forward to X4, who has sprinted as soon as it’s clear he wouldn’t get the outlet.

X2 sprints up the opposite sideline, going to the block when X4 – the opposite wing – gets the ball. X5 trails. 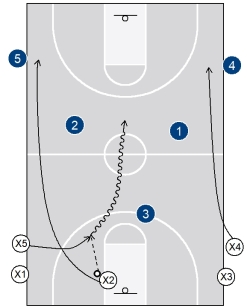 If your offense calls for the ball to be brought up through the middle, you can easily adapt the drill.

You can also add a fourth player. Let him/her come in from the baseline and be a trailer. 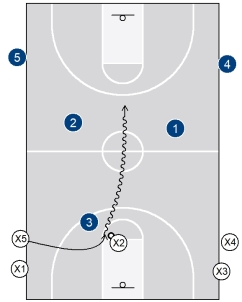 If a defensive player is hanging around looking for a steal, this is a great time to teach the point guards to go for the handoff with the Magic Johnson C-cut.

Have them cut hard in a small arch, so they receive the ball at full speed and can bust by the defense, creating an uotnumbered situation.