I haven’t written a lot about how to back doors in the High Post offense in the book, so I thought I’d put something up here about it.

Basically the options are the same as for back doors in the Dribble Drive Elevate option:

The first option is the dribble out. If the ball handler sees the wing being over-played he dribbles hard at the wing, sending him back door. The pass is one handed off the dribble.

If the pass isn’t thrown either run the ball screen option or have the wing shallow cut to get open.

The other option, which is also in the Dribble Drive, is to pass fake as the wing steps up, setting the defender up for the back door. The pass fake makes the defender think he can get the easy steal, and he’s more likely to bite on the fake. 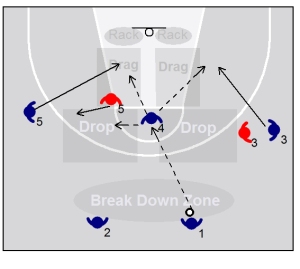 The last option is to pass the ball into the post and look for back doors from there.

In the ball side 3 can back door immediate for the bounce pass, especially if D3 is a bit high.

On the weak side a pass fake will make D5 step out, opening up for the back door.

1 Response to Back Doors in the High Post Offense